Is the official story about the Oklahoma City bombing a lie? 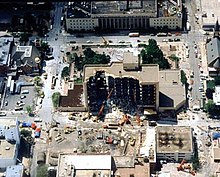 Post Views: 103
4.4
(14)
Astounding evidence that the 1995 bombing of the Murrah Building in Oklahoma City was done with explosives inside the building, not from a truck on the street, that Timothy McVeigh was an undercover agent of the government, not an anti-government terrorist, and even that his execution may have been faked. Sounds crazy – but only to those who are not aware of the facts in this report. -GEG